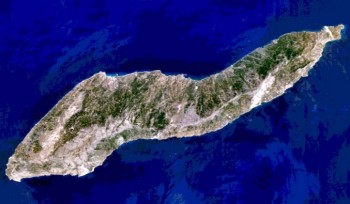 Background. There are places around the world where people live longer and they are active past the age of 100 years, sharing common behavioral characteristics;
these places (i.e., Sardinia in Italy, Okinawa in Japan, Loma Linda in California and Nicoya Peninsula in Costa Rica)
have been named the “Blue Zones”.

Recently it was reported that people in Ikaria Island, Greece, have also one of the highest life expectancies in the world, and joined the “Blue Zones”. The aim of this work work was to evaluate various demographic, lifestyle and psychological characteristics of very old (>80 years) people participated in Ikaria Study. Methods. During 2009, 1420 people (aged 30+) men and women from Ikaria Island, Greece, were voluntarily enrolled in the study.
For this work, 89 males and 98 females over the age of 80 yrs were studied (13% of the sample). Socio-demographic, clinical, psychological and lifestyle characteristics were assessed using standard questionnaires and procedures. Results. A large proportion of the Ikaria Study's sample was over the age of 80; moreover, the percent of people over 90 were much higher than the European population average. The majority of the oldest old participants reported daily physical activities, healthy eating habits, avoidance of smoking, frequent socializing, mid-day naps and extremely low rates of depression. Conclusion. Modifiable risk factors, such as physical activity, diet, smoking cessation and mid-day naps, might depict the “secrets” of the long-livers; these findings suggest that the interaction of environmental, behavioral together with clinical characteristics may determine longevity. This concept must be further explored in order to understand how these factors relate and which are the most important in shaping prolonged life...

Conclusive Remarks
The present work investigated “healthy ageing secrets” of long-lived individuals from the Ikaria Island, Greece. It is of major interest nowadays to study characteristics of people living over the expected life span. It is of interest that in 1995, 13% of the European population was over the age of 65, while the projection for 2015 is expected to rise to 16% [2]. Impressively, the present study included roughly 13% of men and women who were over the age of 80. Although sampling limitations may exist and do not allow for direct comparisons, the inclusion of the Ikaria Island in the Blue Zones seems to be more rational than ever. Data analysis of the Ikaria Study also revealed that modifiable risk factors, such as physical activity, dietary habits, smoking cessation, and midday naps, might depict the “secrets” of the long livers. The discussed findings are in accordance with previous reports [23] and suggest that the interaction of environmental, behavioral, and clinical characteristics may determine how long an individual lives. This is a widely adopted concept and must be further explored in order to understand how these factors relate and which are most important in shaping longevity.los, A. Zeimbekis et al., “The “secrets” of the long livers in Mediterranean islands: the MEDIS study,” European Journal of Public Health, vol. 20, no. 6, pp. 659–664, 2010. View at Publisher · View at Google Scholar